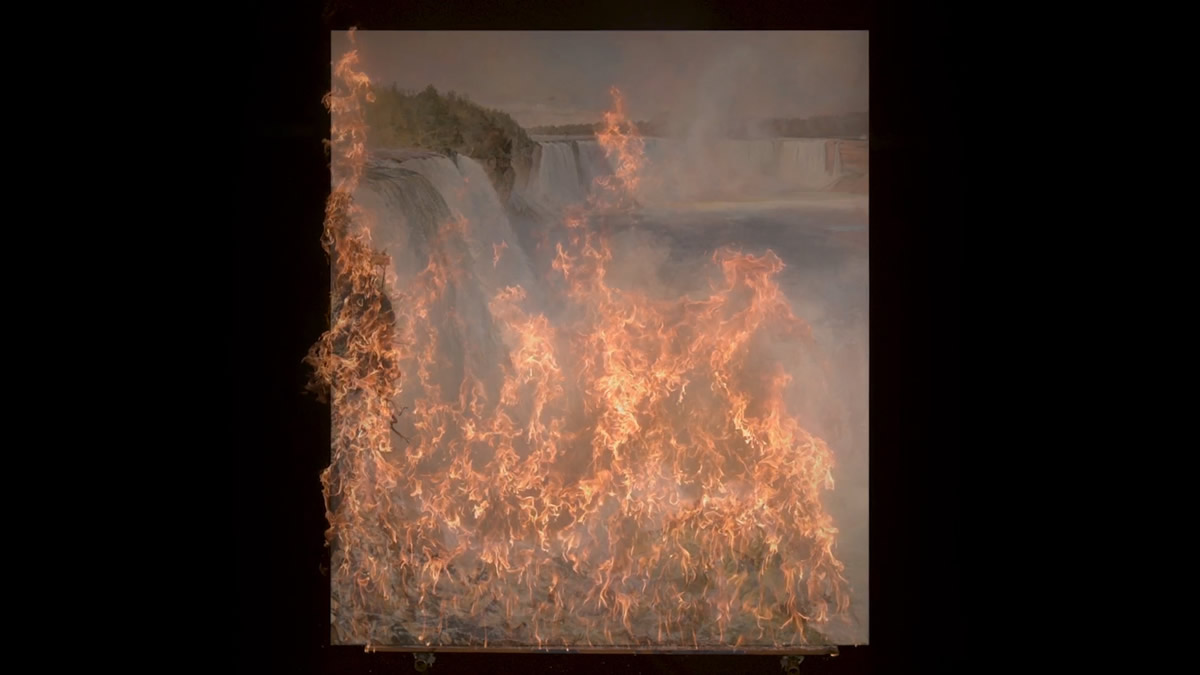 "In theory and spirit, we, the American people, revere our national parks and landmarks… Unfortunately, in practice we are not always so benevolent"
– Diana Wege

Earth Requiem: Wake Up is a unique opportunity to experience Eve Beglarian's Movement I and Jeff Beal's Movement IV of Earth Requiem, with a site-specific art installation conceived by artist Diana Wege, professional choir directed by Malcolm J. Merriweather, and projections by filmmaker/video artist Johnny Moreno, in a warning response to humanity as the effects of climate change, pollution, livestock production, depletion of resources, and nuclear capability threaten the future of our planet.

The piece immerses the audience in a near-future where the degradation and extinction of nature is symbolized by an 18-voice choir, readings from world religious texts and environmental literature, and the apparition of a landscape painting in flames. Earth Requiem: Wake Up joins four disciplines (painting, literature, film, and music) to warn us of a clear and present danger.

This concert of notable “firsts” also features the world première ofDavid Amram’s Prelude, Prayer and Dance for Unaccompanied Viola commissioned by the Roger Shapiro Fund for New Music for The Village Trip festival and composed for violist Consuelo Sherba.

Amram, The Village Trip Artist Emeritus, who celebrated his ninetieth birthday last year, composed the scores for Joseph Papp's Shakespeare In The Park from 1956-1967 and was the Composer and Music Director for the Lincoln Center Theater, writing scores for Arthur Miller´s plays After The Fall and Incident at Vichy. Appointed by Leonard Bernstein as the first Composer in Residence for the New York Philharmonic in 1966, he is now one of the most performed and influential composers of our time. His personal and musical history is entwined with that of Greenwich Village.

This concert is supported by the Roger Shapiro Fund for New Music.

A site-specific preview by Diana Wege