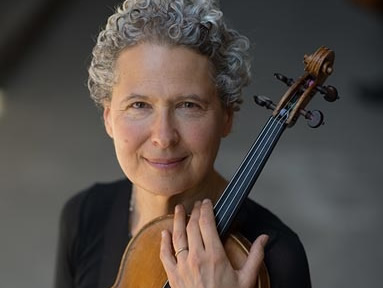 Consuelo Sherba, violist, is artistic director and a founding member of the performance ensemble Aurea. Since 2004, she has performed with Aurea at the Chicago Humanities Festival, the New York University Humanities Festival, FirstWorks Providence, the Pawtucket Arts Festival, the Maverick Festival and throughout New England. She is a 2015 honoree of the Rhode Island Council for the Humanities for her creative vision and multidisciplinary, humanities-driven programming with Aurea; was chosen as Person of the Year by the Pawtucket Foundation in 2007, and in 2008, was awarded the prestigious Rhode Island Pell Award. Sherba has been on the applied music faculty at Brown University since 1986, teaches at the RI Philharmonic Music School and performs with the Rhode Island Philharmonic Orchestra, The Vermont Symphony and Buzzard’s Bay Music Festival and has served as principal violist of the Simon Sinfonietta and the Boston Virtuosi.

Sherba is a graduate of the LaGuardia School for the Arts in New York City, and City College of New York, with graduate work at U/Mass Amherst and UWMilwaukee, and the Aspen Institute for Advanced Quartet Studies.