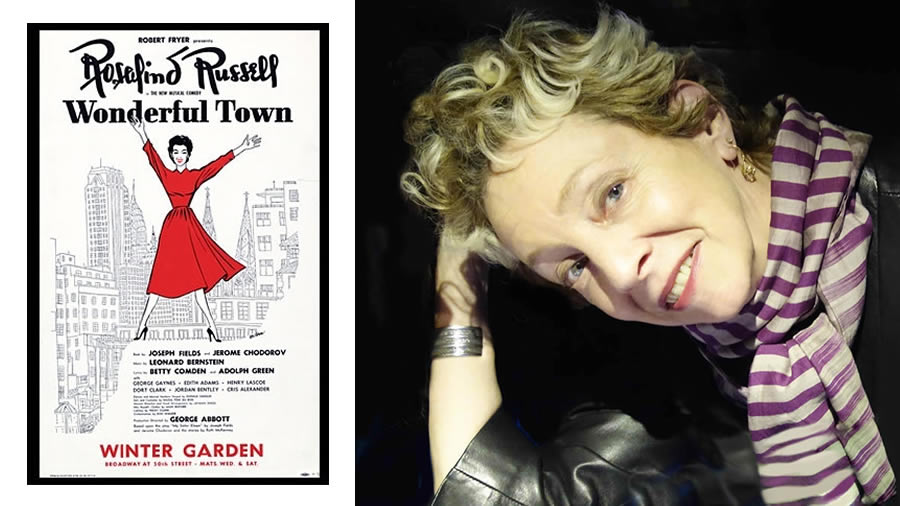 Writes Jamie: “Come along!" booms the tour guide in Wonderful Town's opening number, “Christopher Street.” This 1953 Broadway show – book and lyrics by Betty Comden and Adolph Green and score by my Dad, Leonard Bernstein – is a love letter to the ultra-bohemian good old days of Greenwich Village, as seen through the adventures of two sisters from Ohio. All these years later, I'm inviting you to “come along!” – as I retrace some of the Village spots that appear in the show, plus a few additional relevant points of interest.

Based on the 1940 play My Sister Eileen by Joseph Fields and Jerome Chodorov, and The Short Stories of Ruth McKenney, Wonderful Town was Leonard Bernstein’s second salute to New York City. As with the first, On the Town, Bernstein teamed up with lyricists Betty Comden and Adolph Green, Villagers who as cabaret artists had been a fixture at the nearby Village Vanguard. Rosalind Russell, who had earlier starred in the 1952 film of My Sister Eileen, was cast again for the Broadway version as Ruth, and a 25-year-old Juilliard graduate and future TV star, Edie Adams, as the ingenue younger sister, Eileen. Bernstein wrote songs – including “One Hundred Ways to Lose a Man” and “Swing” – that played to Russell’s strengths as a character actress not known for her vocal prowess. The original Broadway production won seven Tony Awards, including Best Musical.

Oh, and by the way, Jamie recalls that her father wrote the musical to cover the cost of her baby clothes and diapers!

The tour is followed by a very special Cocktails and Cabaret with Janis Siegel and Friends.