Bodies Electric Celebrates the Music of Edgard Varèse, and Frank Zappa and the Psychedelic Circus 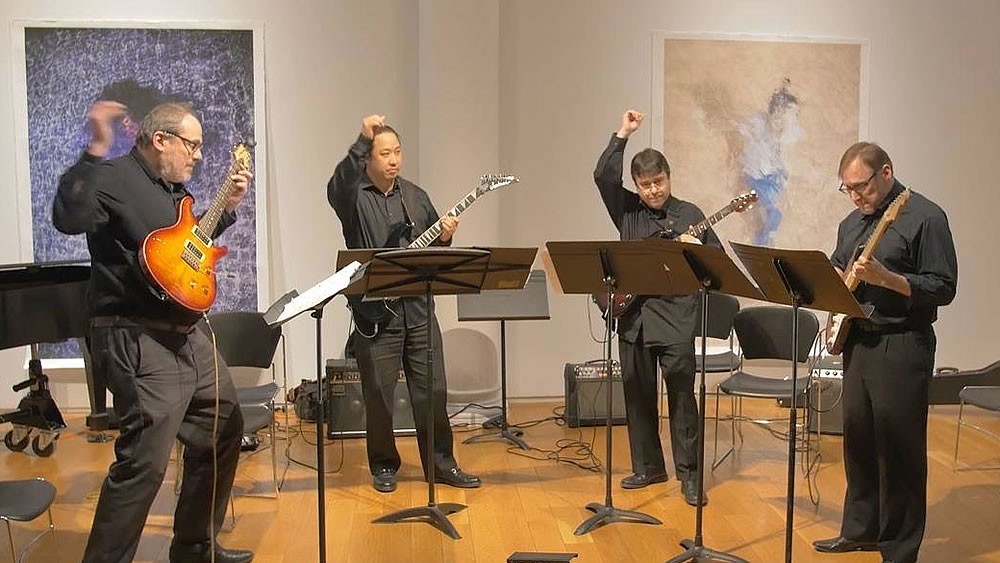 Bodies Electric is an electric guitar quartet founded by John Chang, who assembled a group of players devoted to experimentation and improvisation. Charles Wuorinen's Electric Quartet (2015) was written for Chang and Bodies Electric, a psychedelic electronic medium with pungent rock overtones. Among the composers whose work they have performed: Frank Zappa.

Zappa was a self-taught composer whose work embraced rock, pop, jazz, chamber, orchestral, fusion, and musique concrète. He first heard about Edgard Varèse, the father of electronic music, in a Look magazine article and began to seek out his music, eventually spotting The Complete Works of Edgard Varèse, Volume One in a sale bin – it had been used, unsuccessfully, to demonstrate hi-fi. On his fifteenth birthday, Zappa used $5 from his mother to call the composer: “I figured Mr Varèse lived in New York because the record was made in New York (and because he was so weird, he would live in Greenwich Village). I got New York Information, and sure enough, he was in the phone book.” Zappa never did meet the man he described as “my idol” and treasured a letter he received from him in 1957, written in “very tiny scientific-looking script”.

Varèse died in 1965 and his house at 188 Sullivan Street is marked by a plaque. Not long after, Frank Zappa and the Mothers of Invention began a residency at the Garrick Theater, 152 Bleecker Street, above the Café au Go-Go… opened to rival the Bitter End.