David Amram – whose distinguished seventy-year career embraces every sphere of music and who has collaborated with such diverse figures as Leonard Bernstein, Arthur Miller, Charles Mingus, Hunter S Thompson and Willie Nelson – is to be Artist-in-Residence at The Village Trip. 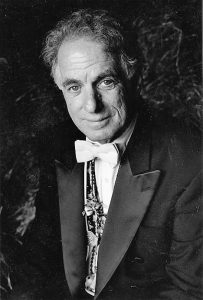 A multi-instrumentalist, composer, conductor, band-leader and multi-lingual narrator who invented jazz/poetry, Amram began composing in 1948 for the Howard University Theater Company in Washington DC. Two years later he joined the city’s National Symphony Orchestra as a French Horn player. He has been Composer-in-Residence for Joseph Papp’s New York Shakespeare Festival, as well as the New York Philharmonic and Lincoln Centre.
In 1957, he created and performed in the first ever jazz/poetry readings in New York City with novelist Jack Kerouac, a moment he will revisit during The Village Trip. As well as making his own unique contributions to the festival, Amram will also “be on hand to add spice wherever I am needed.”

He will be “in residence” at the Washington Square Hotel, home base and principal partner of The Village Trip, a new festival which will celebrate the history and heritage of Greenwich Village, its rich and diverse music, literature, drama and – in due course – much besides.

David Amram, whose myriad achievements include the score for the 1960s screen classics The Manchurian Candidate and Splendor in the Grass and, more recently, the symphonic composition THIS LAND: Symphonic Variations on a Song by Woody Guthrie, commissioned by Nora Guthrie to mark the 75th anniversary of a song that’s regarded as America’s second national anthem, said: “As an old Villager, this will be a crowning achievement for me and hopefully encourage all young people attending to work hard and pursue what they love to do.”

Amram’s many awards include Folk Alliance International’s Lifetime Achievement Award and New York’s Highlights in Jazz Lifetime Achievement Award. The New York Times hailed him as “A One-Man Folk Festival,” and a musician who was “multi-cultural before multi-culturalism existed!” For the Boston Globe he is simply “The Renaissance Man of American Music.”

Describing The Village Trip as “a joyous celebration,” he continued: “I’ll be there for everything and, as the Artist-in-Residence, play whenever needed and try to spread some good cheer and welcoming spirit to all who attend. That’s the way people were to each other when I first came and fell in love with the Village back in the forties as a kid hoping to be some kind of artist myself,  and it is still a magical place today.

“I think your festival is a really important way to let people know what a treasure the legacy of the Village is.”

Liz Thomson, co-founder and Executive Producer of The Village Trip said: “To have David Amram as Artist-in-Residence – well, the honor is all ours. He is a great polymath and a wonderful man whose creativity is as boundless as his energy. We are truly thrilled.”

The Village Trip – which Amram describes as “a joyous celebration” – takes place from September 27 -30, with events in and around Washington Square. The program will be announced shortly, and more details can be found at www.TheVillageTrip.com