A loft is perhaps not the most obvious place to build pianos, but that’s where Steinway’s
American history began in 1853, Heinrich Engelhard Steinweg having arrived in New York
from Germany with his family three years earlier.

It was at 85 Varick Street – “a curiously small edifice,” according to the New York Times – at
its junction with Canal, on Manhattan’s west side, that Steinweg built the first piano to carry the Steinway & Sons name. Bearing the number 483 – the previous 482 pianos had been made in Germany under the Steinweg name – it was sold for $500. 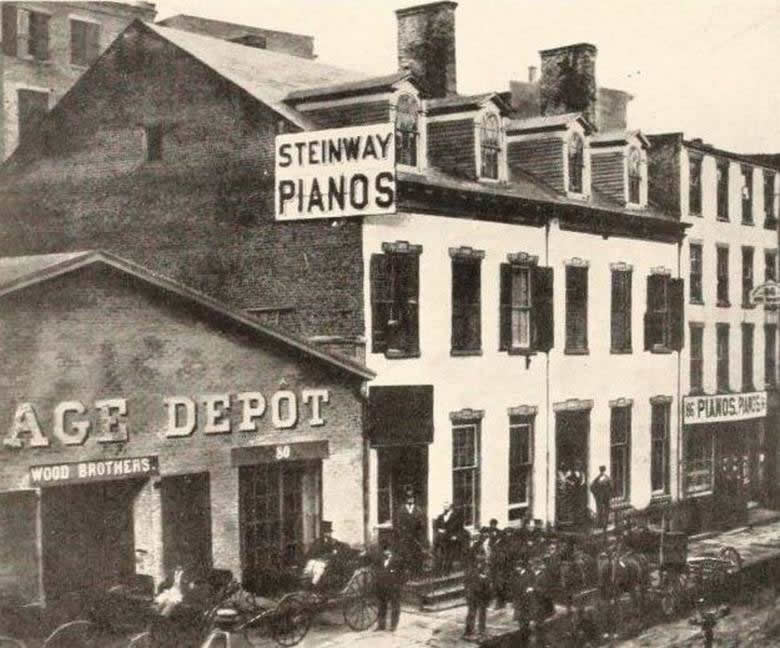 According to Richard K Lieberman’s history Steinway & Sons (1995), in its first year of
business Steinway produced 11 pianos, handmade by the family with each member making a specific part. They were not yet grands – the first Steinway grand was built in 1856 – but square pianos: Steinweg is credited with making his first – a present for his bride – in 1835, and they were owned by everyone from Franz Liszt to Jane Austen and George Washington.

In 1854, Steinway moved east along Canal to establish new premises at 82-88 Walker Street, just east of Broadway. Today it’s Chinatown but back then it was New York City’s piano row – indeed, the building had previously been home to Nunns & Clark, piano makers who had come to the US from Britain in the 1830s and to whom Heinrich’s sons Charles and William had been apprenticed. “Steinway Pianos” was painted on the side of the building, which was occupied rent-free for the first six months of the Steinwegs’ tenure. (The family name would not be officially anglicised until 1864.) In their first weeks of operation there, the Steinwegs and their five assistants produced two pianos a week, though three were needed to meet demand.

The following year, 1855, the Steinwegs decided to enter a competition at the American
Institute Exhibition, their goal to build a piano better than anything heard before. The casing was free of the sort of ornamentation that characterised pianos of the day and the judges were not impressed – until they heard the sound it produced. A reporter noted its “great power of tone, a depth and richness in the bass, a full mellowness in the middle register and brilliant purity in the treble.” The year following the Exhibition, Steinway sales tripled to 208.

The company’s value was calculated at $24,000 – more than four times what it had cost to
start the business. By 1858, that figure had been tripled. Both sales and showroom space
doubled.

The emergence of an American middle class boosted the demand for pianos so the
Steinwegs rented stores on Mercer and Crosby streets (now SoHo), plus a lumber yard on
23 rd Street. But demand soon outstripped supply: piano-making required a good deal of
space and land downtown was at a premium. Thus, in 1858, William Steinweg acquired
cheaper land uptown, between Park and Lexington at 52 nd and 53 rd Streets, where a 175,000 square-foot, five-story architect-designed factory was built.

It opened in 1864, the same year as what the Times described as “a new and magnificent
marble wareroom” at 109 East 14 th Street, “the handsomest” in the city which combined
magnificent showrooms with studios for musicians. Two years later, the foundation stone
was laid for an adjoining concert hall with space for a full orchestra and an audience of
2,500. William Steinway remarked: “One concert on Saturday night sells pianos on Monday
morning.” Over the years, many celebrated musicians would perform at Steinway Hall,
among them pianist Anton Rubinstein, soprano Christina Nilsson and conductor Walter
Damrosch.

Steinway Hall was also used for lectures: in 1867 and ’68, readings by Charles Dickens had
citizens lining up round the block.

In the 1870s, work began on Steinway Village in Queens – a factory plus homes and
amenities for workers – in Astoria, where it remains. In 1925 Steinway Hall was relocated to
West 57 th Street, across from Carnegie Hall. It is now at Sixth Avenue and 43 rd Street, next to Town Hall.

Steinway and Sons - another story of downtown immigrant success