On the street where you live.
Donna Florio’s vivid and charming memoir captures the spirit of a lifetime lived on Bank Street | Liz Thomson

Bank Street may not be the most famous street in Greenwich Village – West 4th Street, studded with so many literary and musical waystations and enshrined in song, is often referred to as New York’s Left Bank. Yet its six mostly residential blocks, intersected by West 4th and Bleecker, another legendary thoroughfare, tell a no-less fabled story. Writers, artists, musicians, actors, spies and social reformers have occupied its brownstones, part of a community where doors were always open and everyone looked out for one another.

Donna Florio was born on Bank Street amid the dull-grey of the Eisenhower years, when New York was shabby and many families were leaving the city in pursuit of a fully-applianced, picket-fenced version of the American dream. She lives there still, same building same apartment, and has recalled it all in bright Technicolor in Growing Up Bank Street: A Greenwich Village Memoir (NYU Press). 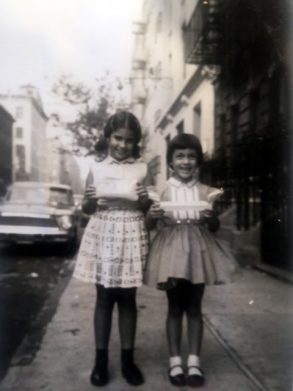 Donna (right) and her friend Irene on Bank Street 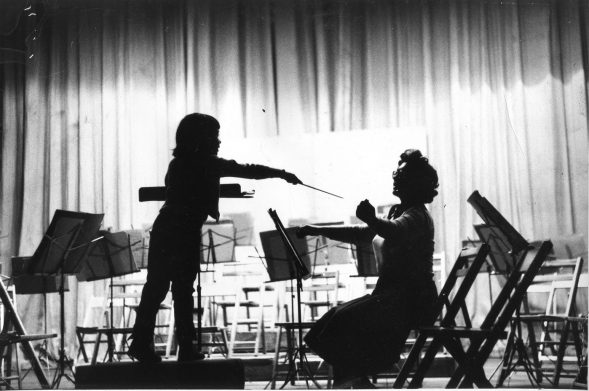 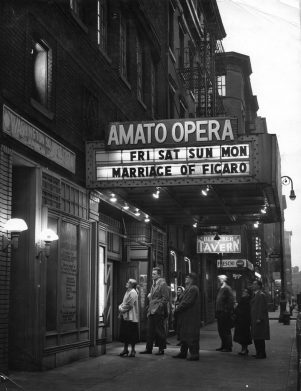 “It was a rich place to grow up and I was very very lucky,” says Florio, who assumed that Bank Street was just Main Street – until she passed the exam for entry to the newly co-educational Stuyvesant High School on East 15th Street that drew talented students from across the city. “That’s when I learned what the world is made of. In a very real sense, I had a shock leaving the Village – it was the first time I met people from more traditional enclaves of New York.” Suddenly, she was teased about being Italian, unwelcome in some homes, and came to understand that being mixed race or gay was actually rather controversial. “People came to the Village because they were too gay, too politically radical, too artistic to survive elsewhere,” Florio reflects. “Some of them came out of literal fear for their lives and when they got here they formed Village clans of the heart.”

Her parents, Larry and Ann, were theatre people, her father an aspiring director and her mother an opera singer. They were part of the pioneering Amato Opera on Bleecker when Donna’s debut was announced in The Villager under the headline “Opera Baby Arrives.” She was on-stage “in utero”, until her mother’s swollen ankles forced her to take a break. When she progressed uptown to the Met, Donna joined the children’s chorus. Her mother also taught voice, students coming to the family’s tiny apartment and, by age thirteen, Donna had a three-and-a-half octave range. “I had a natural ability to sing” – though no desire to make it a career.

In those days there were warehouses and factories on Bank Street, and the White Horse Tavern, across from its western end, was still a longshoremen’s bar. “There were Italian Catholics and Irish Catholics and the trust fund bohemians and Auntie Mame who came in with money and could afford the brownstones and lived their artistic lives,” Florio continues. “We all knew each other. My block between West 4th and Bleecker was my play area and I could name every kid in my gang. My parents were upstairs with the window open and could hear what was going on, as could every other neighbour. We’d play stick-ball on our block and when we were ten we could go to Washington Square Park. We felt very important on the big-kid swings. We played tag around the fountain and ignored the NYU students and the tourists. It was our Square.”

Named for the Bank of New York, which established an outpost of empire in Greenwich Village in 1798 when Wall Street was hit by a case of yellow fever, Bank Street has been home to Bell Laboratories, the Bank Street College of Education and the HB Studio, all of which made their mark. A young Lauren Bacall lived there. So too John Cage and Merce Cunningham, and Marion Tanner, the real-life Auntie Mame. Sid Vicious died there – news footage captured a startled Florio, doorstepped by news reporters hoping for intrigue. John Lennon and Yoko Ono spent two years on Bank, in flight from the Beatles and the FBI – the two-room apartment was rented from Joe Butler of the Lovin’ Spoonful. Florio, watering her flower-box, managed one day to anoint the couple as they passed beneath her window. Lennon was unperturbed.

In Growing Up Bank Street, such figures are just brief walk-ons. The real stars are the people among whom Florio grew up, some of whom left an indelible mark not just on the Village but on wider society. Author Katharine Anthony, for example, with whom earnest little Donna discussed books and quizzed her about family life. “She and Elisabeth Irwin had moved in and raised two daughters. That’s what they did. And they were respected as a couple as much as anyone else.” (Years later, their house, 23 Bank, featured in Caleb Carr’s best-selling novel The Alienist.) Bella Abzug was another neighbour – Donna found her unnerving, yet she was friendly enough, even after a standoff at her junior high school graduation when Larry Florio told her she’d spoken for too long. Mary Jacobs was a schoolfriend: after she’d been over to play, Donna’s mother pulled a book from her shelves and explained “Mary’s mom wrote that – she’s a genius.” She in turn went to Mary’s home on Hudson and remembers “a big room decorated with books and an architecture table with architecture designs all over it. Mrs Jacobs was kind and gracious and gave us milk and cookies…”

Then there was the Browders, William and Rose, the Communists downstairs on whom the FBI kept a close watch. Florio recalled Mrs Swanson, from apartment 2A, complaining about their raucous parties. And as she thought about it more, she remembered that “free-spirited Alice Zecher” from 3C used to attend. Her parents verified her recollections and Donna went back to the journals she’d kept assiduously growing up for further pointers. The FBI files explained a lot more.

Small wonder that Boston, where Florio went to study liberal arts, and just about anywhere else, save for Florence, where she went to learn Italian, and Bangkok where she went to teach special education, seemed ineffably dull! “I tried to adapt but I started to realise that I didn’t fit into American life. I didn’t want to! It’s like the Jesuits saying give me the child until he’s seven and he’s mine for life – well, the Village said give us Donna until she’s grown and she’ll never fit in anywhere else!”

Florio’s not one who thinks the good times are all gone, though she laments the prohibitive costs of entry to this perennial bohemia. She talks about “the boys downstairs” who arrived ten years ago from California border towns determined to be architects but decided it was their mission to bring authentic tacos to New York. “I got the tasting part! They’re full of life and enthusiasm and they’ve made Bank Street their own Bank Street, and they’re booming. That’s the kind of energy people bring here… Everyone thinks the Village is just arts. Auntie Mame probably couldn’t sing a note if you held a gun to her nose! Her drive was Buddhism and, having lived through the Depression, saving humanity one human being at a time. Bella Abzug wanted women’s rights, gay rights, clean air, clean water – that was her drive. My parents were the stereotype – but people come here and they bring their own passions.”

Growing Up Bank Street is full of warm and loving stories and perfectly drawn character sketches of friends and neighbors past and present, sung and unsung, famous and unknown, which have marinaded for a lifetime, like a good spezzatino. As we speak, the still close-knit community is mourning Tish Touchette, “a female impersonator”, who arrived with his white poodle in 1957 and died a month shy of 97. Florio didn’t begin writing until 2002, seeking refuge from the present having witnessed the unfolding horror of 9/11 from her teacher’s office downtown. It was her late husband Richard, a doctor, who persuaded her to “quit the damn day job” and devote herself to the book. He died knowing that she had found both an agent and a publisher.

“As I was writing I started to realise all the different lessons these people had given me in life. Marty and Rozzie Braverman taught me unconditional love. Auntie Mame taught me that I’m a divine flame from heaven. People here gave me blueprints on how to live my life. I am the product of these people as much as, and sometimes more than, my biological family. And the thing I really want people to understand is that the stories of the people here, from Queen Anne to the young ladies next door to me and the taco boys below, are the stories of America itself.

“I didn’t need to make anything up. The stories are all here.” 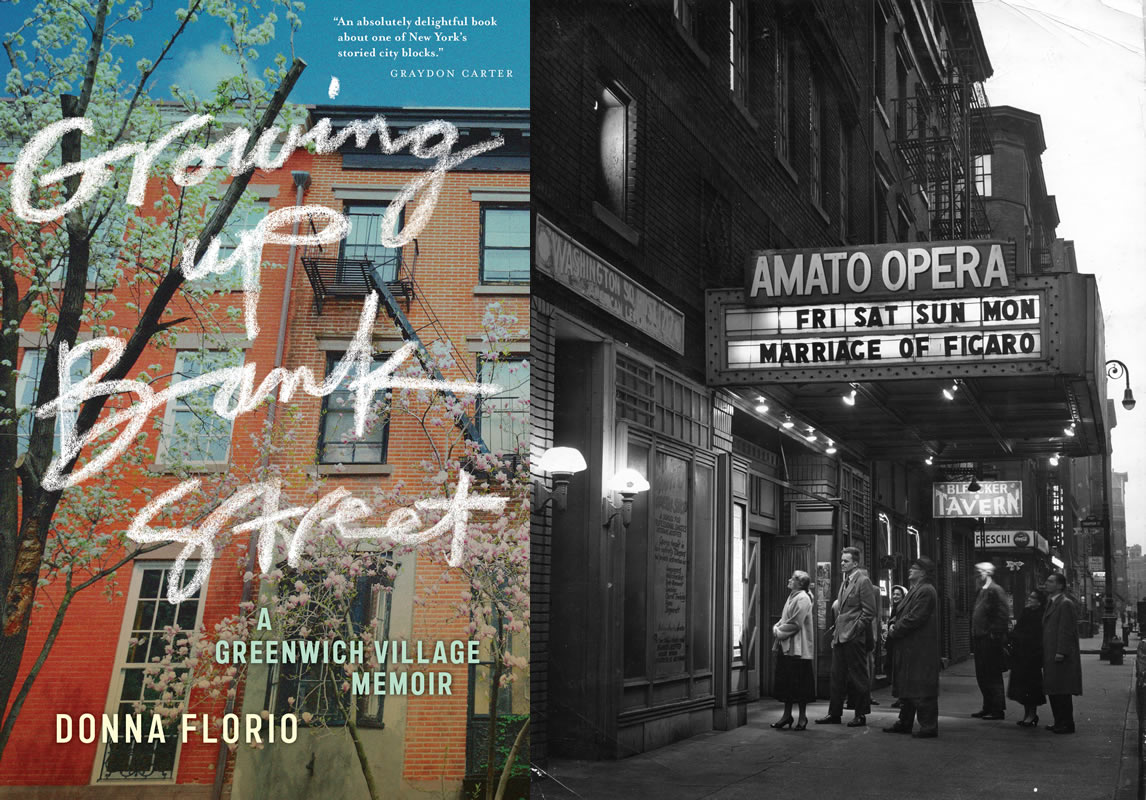 Growing Up Bank Street: A Greenwich Village Memoir is Donna Florio’s fierce love letter to a quintessential Greenwich Village street and its incredible inhabitants. The only child of an opera director and a Metropolitan Opera soprano, Florio lived among the varied brownstones and apartments of Bank Street, which were from the 1950s through the 1970s her childhood playground. The street’s residents are still her Village kin today. Neighbors ran the gamut from painters, social activists, writers, longshoremen, actors, postmen, and trust fund bohemians, to Bella Abzug, John Lennon and Yoko Ono, Merce Cunningham, Charles Kuralt, and Marion Tanner – the irrepressible model for Auntie Mame, who babysat Donna as a child. The stories from Donna’s book are so unique and yet universal in their reach. The lessons she has gleaned over the years about how to be free, how to be a neighbor, and how the Village has transformed, are incredible, delightful, and wild.

Presented in partnership with Village Preservation