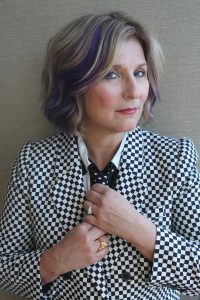 Janis Siegel of the Manhattan Transfer will be the special guest of Latin Jazz and Salsa legend Bobby Sanabria and his 21-piece Multiverse Big Band in Washington Square Park. A free concert, Bringing It All Back Home to Washington Square takes place on Saturday, September 25 at Garibaldi Plaza in the Park.

The ten-time Grammy-winning singer is a founding member of The Manhattan Transfer and also enjoys an illustrious solo career. Janis said:

“I love singing with Bobby’s big band, especially in the playground of my teen years, Washington Square Park, for the people of my neighborhood (and others of course!) and to celebrate the rich cultural and intellectual heritage of Greenwich Village. Bobby and the Multiverse are a powerful force for good and I am proud and happy to raise my voice with them. I was born and grew up in Brooklyn, but the Village was a major factor in my life. As a teenage musician, I performed at Folk City, Kenny’s Castaways, and the Gaslight Café. I’ve been happily living in the West Village since 1981.”

“Our concert will celebrate the Village’s legacy of culture and creativity, especially its rich history with the Puerto Rican community, which started with tobacco workers settling there in the early 20th century and continuing with the Newrican Village and Nuyorican Poets Café.”

“And I’m deeply honored that Janis Siegel, the Queen of Brooklyn, has agreed to join me Da’ Bronx Beatmaster for the gig.”