Jeremy Steig (September 23, 1942 – April 13, 2016) was born in Manhattan, the son of New Yorker cartoonist William Steig and Elizabeth Steig, head of the fine arts department at Lesley College. Steig was a maternal nephew of Margaret Mead and Leo Rosten and the cousin of Mary Catherine Bateson. Steig himself worked as an artist and graphic designer. He lived in the West Village near Washington Square Park and played many local jazz clubs in the 1970s.

At 19, Steig was involved in a motorcycle accident which left him paralyzed on one side. For some years afterward, he played the flute with the help of a special mouthpiece.

After a start in mainstream jazz, with albums with Bill Evans and Denny Zeitlin, Steig became an early force in the jazz-rock fusion experiments of the late 1960s and early ‘70s, including the short-lived band Jeremy and the Satyrs, featuring Warren Bernhardt, Eddie Gómez and Adrian Guillary. He also played with the Plastic Ono Band. 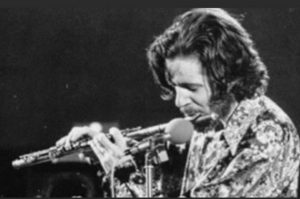 Steig addressed the tonal color restrictions of the instrument by the use of “modern” acoustic techniques (voice multiphonics and overtones similar to Rahsaan Roland Kirk, key percussion), electronic effects, and by using the entire battery of flute-family instruments, from piccolo to bass flute (including the obscure Sousa-era alto piccolo), often over-dubbed and multi-tracked together.

His song “Howlin’ for Judy”, from his 1970 album Legwork, was sampled in the Beastie Boys’ 1994 single “Sure Shot”, providing the main instrumental part of the song.

Steig performed the role of The Pied Piper, exclusively on flute, in the movie Shrek Forever After, based on the character created by his father.

This event is free to attend, but we suggest a $10 donation to The Village Trip.