On the corner of Bleecker and MacDougal Streets, the beating heart of Greenwich Village, in the newly reopened Café Figaro, The Village Trip unveiled highlights of the 2022 festival with an evening of music and delicious food generously provided by chef-restaurateur Mario Skaric.

It was in every sense a taste of the Village, its rich history and culture, and a taste of The Village Trip as we brought David Amram back to the spot where he and his old friend Jack Kerouac had hung out sixty-five years ago, performing jazz and poetry before the success of On the Road turned Kerouac into a star.

This year’s festival – the fourth Village Trip – will honor Kerouac’s centenary in words and music, including a reading of his most celebrated novel at another Village landmark, the Strand Bookstore. David Amram – Artist Emeritus of The Village Trip – will provide the music. 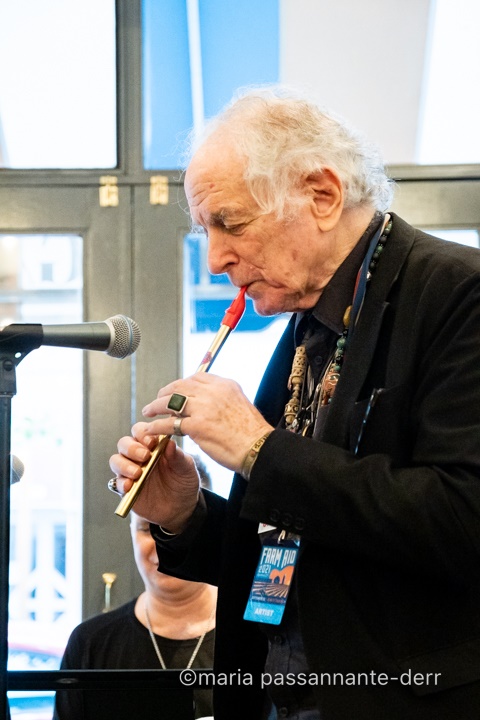 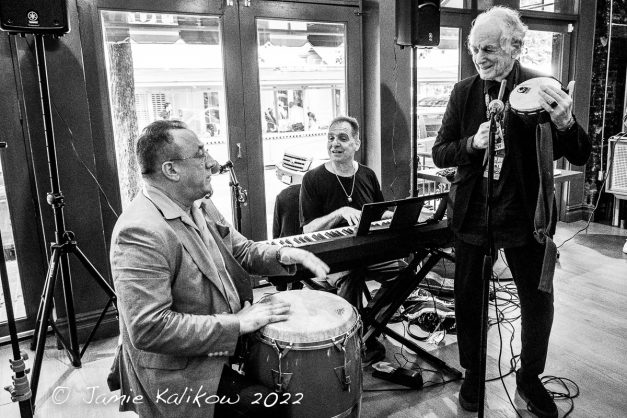 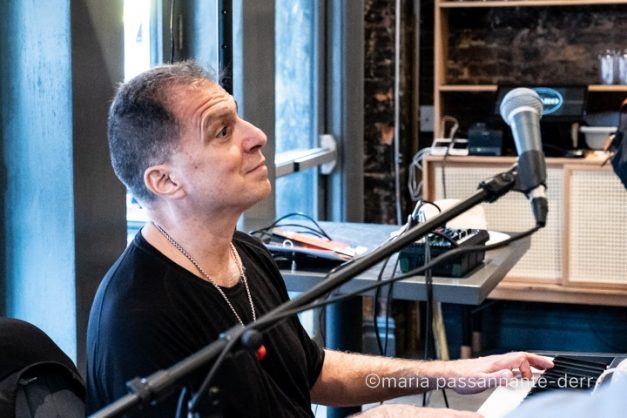 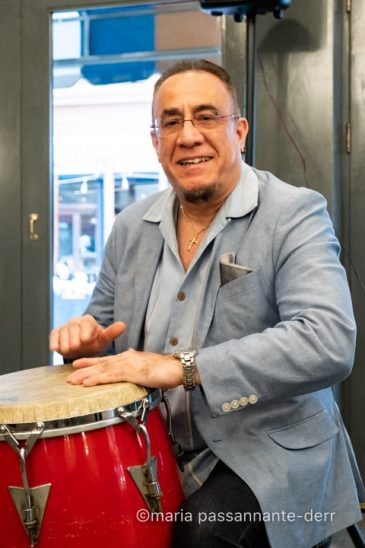 At Figaro, David read from his memoir, Offbeat: Collaborating with Kerouac, and played his usual array of instruments, collaborating as always with those around him: singer Antoinette Montague, percussionist extraordinaire Bobby Sanabria, and pianist John di Martino. Just a handful of the talented musicians will perform at this year’s Village Trip, which will run September 10 – 24.

And Lorin Sklamberg dropped by to offer a generous foretaste of what he and the rest of The Klezmatics will perform at Bringing It All Back Home to Washington Square, the free headline concert in the Park that is the festival’s signature event. The Klezmatics will be joined by Joshua Nelson for their much-acclaimed klezmer and gospel show at which the Rev Billy and the Church of Stop Shopping will also be rallying the faithful. 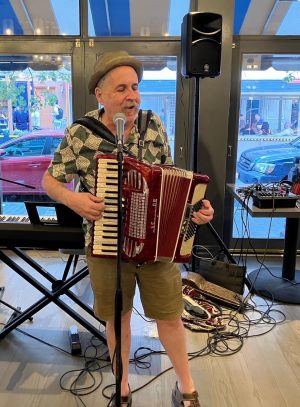 Lorin Sklamberg of The Klezmatics. 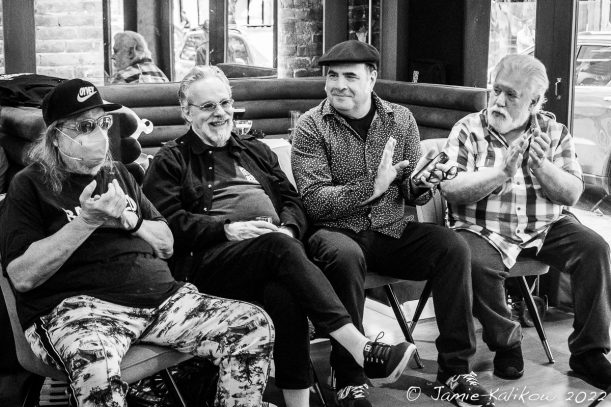 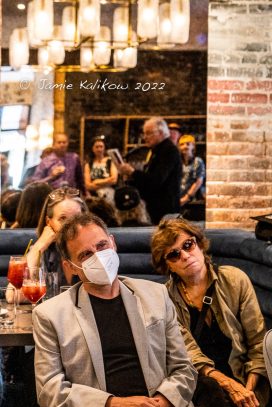 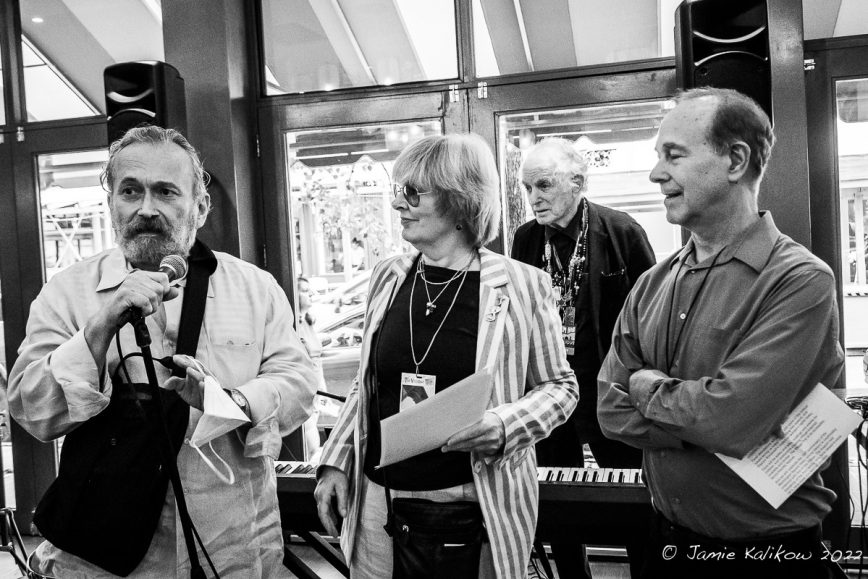 Marc Kehoe, artist and curator of Framing the Village, the festival’s art show (left) with Liz Thomson and Cliff Pearson 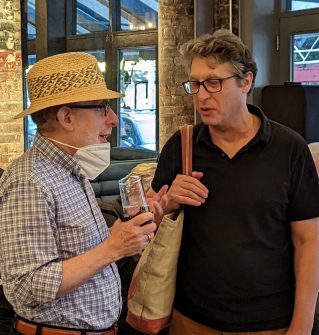 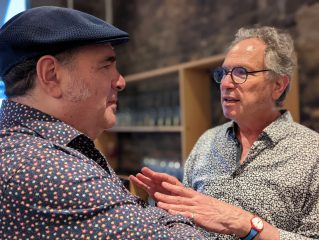 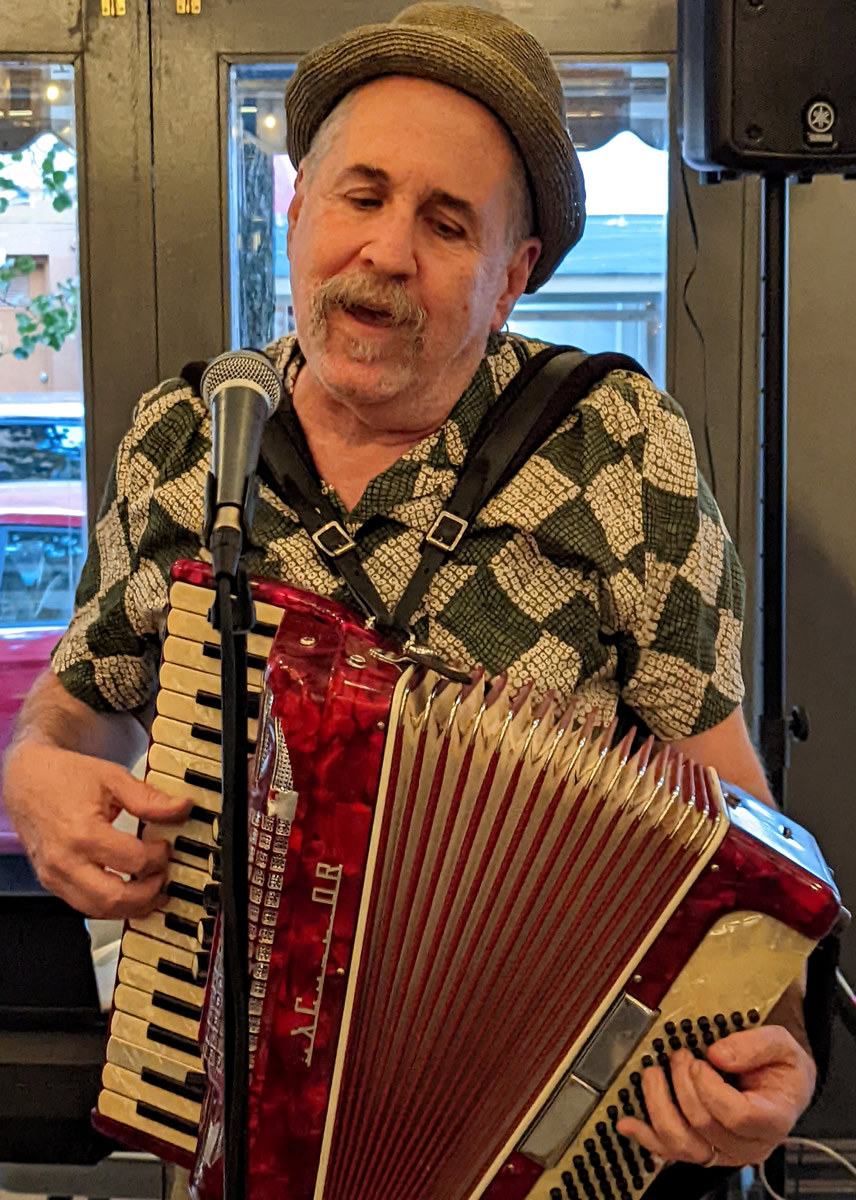 Lorin Sklamberg of The Klezmatics.

Guests at the launch party included Jeremy Tepper of Sirius XM, David Browne of Rolling Stone, music historian and archivist Arthur Levy, and author and sometime musician Larry Sloman, known to one and all as Ratso. Historian and tour guide Kathleen Hulser and singer-songwriter Diana Jones each brought their dogs, Shake and Birdie. Shake, just six weeks old, was making her first trip to the city and was quite the star – and better behaved than many of those who frequented Figaro back in the day!

“It’s really good news that The Village Trip is back – bigger than ever and going all the way to the East Village!” he said. “There’s so much amazing, eclectic culture in this community, which block-for-block has more artistic history than almost any other place in America. It’s just wonderful. I cannot wait to attend the festival.”

Get a taste of the vibe in our new video, the splendid work of Michael Jacobsohn, assiduous chronicler of the Downtown scene. The Village Trip at Café Figaro