Artist Lori Loebelsohn was a teenager in Brooklyn when she first set foot in the Village. She was immediately hooked and was soon living there, an art student with Washington Square Park as her campus. The richness of her experience, and her longstanding connections with the Washington Square Hotel, have now inspired an evocative poster for The Village Trip… 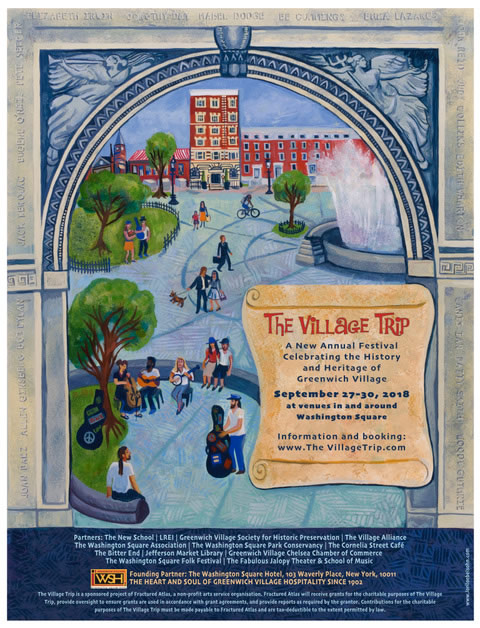 My first recollection of the Village was when I was a high school student and took the train from Brooklyn and ended up in Washington Square Park. The energy was overwhelming. The Park was filled with folk musicians, jugglers, frisbee players and bohemian artists. I had never seen a world like it, having grown up in Brighton Beach, Brooklyn. It was a haven for artistic freedom, progressive ideas and an eye-opening experience for me. It was the start of my journey as an artist and what led me to college there.

I entered Parsons as an art student in 1978 and began my formal training as an artist. Soon after, I transferred to the Cooper Union School of Art. Washington Square Park was my campus and the backdrop of memories that significantly influenced my thinking for years to come. I lived in the Village during the height of the punk rock era. It was normal to see people with pink Mohawks, piercings and chains. Living on East 6th Street, if the wind was blowing west I could smell the pungent aroma of the Indian restaurants down the street. When I moved to East 3rd Street, the Hell’s Angels were my neighbors and protected our block. It was a time when a student or a young artist could afford to live in the Village. The Park was a haven to meet artists, musicians and writers, and I remember these random encounters well. 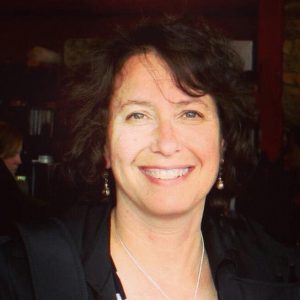 Making art has been the constant in my life, though my path as an artist has not been linear. Throughout the years, I have painted representational oil and watercolor portraits, abstract paintings based on music and dreams and done illustration work. Currently, my main focus is to create paintings that commemorate major life cycle events such as weddings (Ketubah), b’nai mitzvahs and births, as well as illustration work for a variety of clients.

There are also other connections to the Village. My mother was a fashion illustrator who also attended, and then taught fashion, at Parsons. My parents were dear friends of Rita and Danny Paul, who bought what was then the Hotel Earle, now the famed Washington Square Hotel. This family friendship has continued after the passing of my parents and Dan Paul. I worked at the Hotel when I was a college student. My twin sister, Alise, has done extensive decorative painting there. The Pauls transformed what was once a rather dingy single room occupancy hotel, the one that Joan Baez wrote about in “Diamonds and Rust”, into a beautiful one-of-a-kind gem that features hand-painted tiles, marble-ized walls and gold leaf finishes. My family continues to have a close connection to both the Hotel and to the Pauls.

I met Liz Thomson and Liz Law, founders of The Village Trip, at Dan Paul’s memorial service in January 2018. It seemed fitting that this connection was made at a time when we were hearing stories about the history of the Washington Square Hotel and Greenwich Village, celebrating Dan’s life, and a time when the Village represented a historical era that had a major impact on the cultural and political life of the City. That is how I connected to The Village Trip.

Revisiting the Village now has brought me full circle as I reflect on my memories and experience there throughout my life. So many of the landmarks are the same. I was honored to create the poster for The Village Trip. I hope that this event will help bring young people and newcomers to the Village to understand that the Village is a unique place that holds a very special place in history.

To see more of Lori’s artwork visit her website: www.loriloebelsohn.com