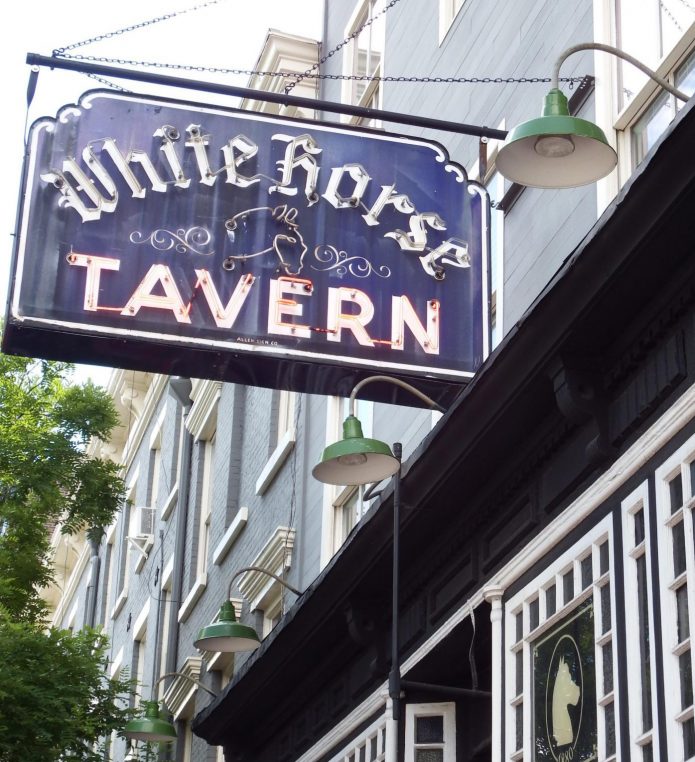 The White Horse Tavern is associated with two Dylans: Dylan Thomas, who took his last of many drinks there, and Bob Dylan, who hung out in this longshoremen’s bar (which opened in 1880) with the Clancy Brothers, Judy Collins and New York Times critic Robert Shelton. Other well-known patrons of ‘the Horse’ as it was known included Jane Jacobs (who did so much to save the Village and whose former home is nearby), Norman Mailer, James Baldwin, and Hunter S Thompson. It is said to be ‘the tavern’ in the Mary Hopkin hit song ‘Those Were The Days.’ It was also a favourite watering hole for Don Draper in Mad Men. 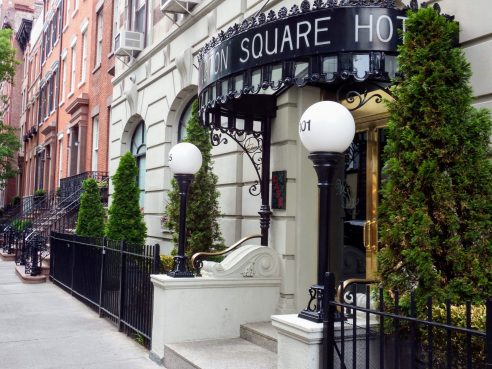 The Washington Square Hotel has been the heart of Greenwich Village hospitality since 1902, when it opened as the Hotel Earle. The Paul family acquired it in 1973 and changed its name in 1986. Ernest Hemingway was an early guest, staying for three weeks before heading to the front as an ambulance driver in the Great War. P G Wodehouse stayed, while for Patricia Highsmith it was a scene of seduction. Maeve Brennan, a star turn at the New Yorker’s who hid behind the byline the Long-Winded Lady, lived in the Earle for two periods in the late 1950s and early ‘60s. Its location made it a favourite with musicians: Chuck Berry, the Rolling Stones and Bo Diddley all checked in, the latter a regular who played a gig in the lobby to mark the Hotel’s centenary. John Phillips wrote ‘California Dreamin’’ in one of its rooms and, in room 707, Roger McGuinn penned ‘Chestnut Mare.’ Bob Dylan stayed, as did Joan Baez, who recalled their affair, and the Hotel, in her 1975 classic ‘Diamonds and Rust.’ More recently, Norah Jones waited tables and played a couple of gigs in its North Square Lounge before setting forth on other adventures. 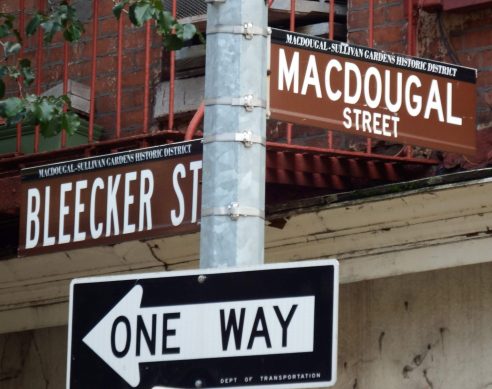 Bleecker St/MacDougal Street – the crossroads that is the hub of Greenwich Village, its Haight and Ashbury. The 1950s and ‘60s put both streets on the international map, but long before the beats and the folkies arrived figures such as Marie Jenney Howe had established the Heterodoxy Club, which met at Polly’s Restaurant at 137 MacDougal (Theodore Dreiser, Ezra Pound and Ira Gershwin were regulars), and Eve Addams a tearoom at 129 (now La Lanterna di Vittorio) which proclaimed “Men are admitted but not welcome.” Many of the bars and restaurants have long histories, not least the Minetta Tavern and Caffe Reggio. A few steps away, the Cafe Wha? remains hallowed ground – Jimi Hendrix and Bruce Springsteen, Lenny Bruce and Lenny Bruce were among those who trod its boards – while across the street at the Gaslight Bob Dylan played one of his earliest Village gigs. Bleecker too was lined with clubs and hangouts: the Cafe au Go-Go was where Joni Mitchell and the Grateful Dead played their first New York gigs, and the Bitter End hosted such diverse figures as George Carlin and Woody Allen, Neil Diamond, James Taylor and Randy Newman. In a basement below the Village Gate, Dylan wrote his 1963 classic ‘A Hard Rain’s a-Gonna Fall.’ 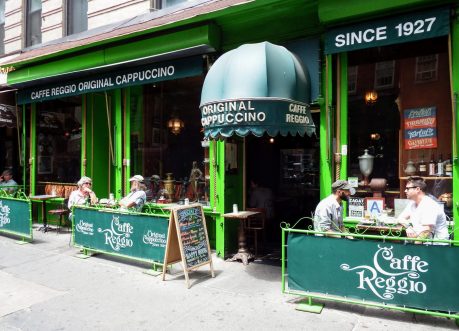 Caffe Reggio opened at 119 MacDougal Street in 1927 and it was where cappuccino was introduced to Americans. The original 1902 espresso machine Domenico Parisi bought with his savings has pride of place in a small room stuffed with artefacts: a bench from a Medici palazzo, a painting from the school of Caravaggio… In 1959, democratic candidate John F Kennedy made a campaign speech in front of Reggio, and the Caffe has featured in many movies, among them Serpico, Shaft, The Godfather Part II and Inside Llewyn Davis. Allen Ginsberg and Jack Kerouac were among those for whom it was a regular hang-out. 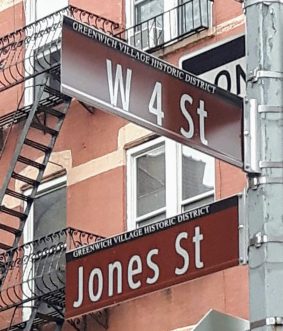 West 4 St/Jones St are streets writ large in the history of Bob Dylan’s Greenwich Village. In fact, West 4th – on which Edward Hopper and Jackson Pollock first exhibited – is often referred to as New York’s Left Bank: Edward Albee wrote his first produced play in the kitchen of his walk-up at 238, and it was on this street that Willa Catha met her partner Edith Lewis, Allen Ginsberg his lover Gregory Corso. And it was ‘in a little room’ on West 4th Street that John Reid wrote Ten Days That Shook the World. Jack Kerouac and Bruce Springsteen hung out at the Riviera Cafe, and Eugene O’Neill found solace at the Golden Swan, nicknamed the Hell Hole, which provided the inspiration for Harry Hope’s Saloon in The Iceman Cometh. Dylan, of course, lived at 161, paying $60 a month for rooms above what was then Bruno’s Spaghetti Parlor. Just round the corner on Jones, he and his then girlfriend Suze Rotolo were photographed by Don Hunstein on a snowy day in February 1963. The result was one of rock’s most iconic album covers: The Freewheelin’ Bob Dylan. 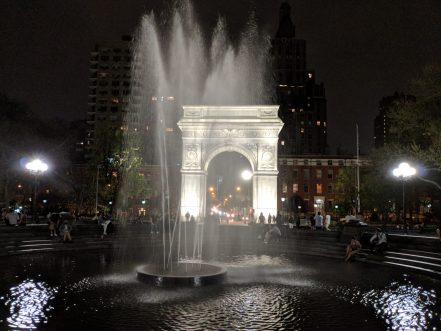 Washington Square Park, its celebrated Arch marking the southern tip of Fifth Avenue, is at the heart of Greenwich Village, its 10 acres a favourite with locals and tourists alike. It was variously farmland, a potter’s field and a parade ground and finally, in the late 1870s, a park. By that time the streets around it and their Greek Revival-style homes had become some of city’s most desirable – Henry James lived on the northside Row and his novel Washington Square began publishing as a serial in 1880. Down the years, there were many notable residents, among them Eleanor Roosevelt, who moved into an apartment on Washington Square West following FDR’s death and joined with Jane Jacobs to fight city planner Robert Moses whose urban renewal projects threatened the Park. They succeeded, and in 1959 the Park was closed to traffic, allowing the area around Stanford White’s Washington Memorial Arch to become a focal point around which musicians and protesters would henceforth gather. In recent years, the Washington Square Park Conservancy has overseen a complete restoration of the Park. 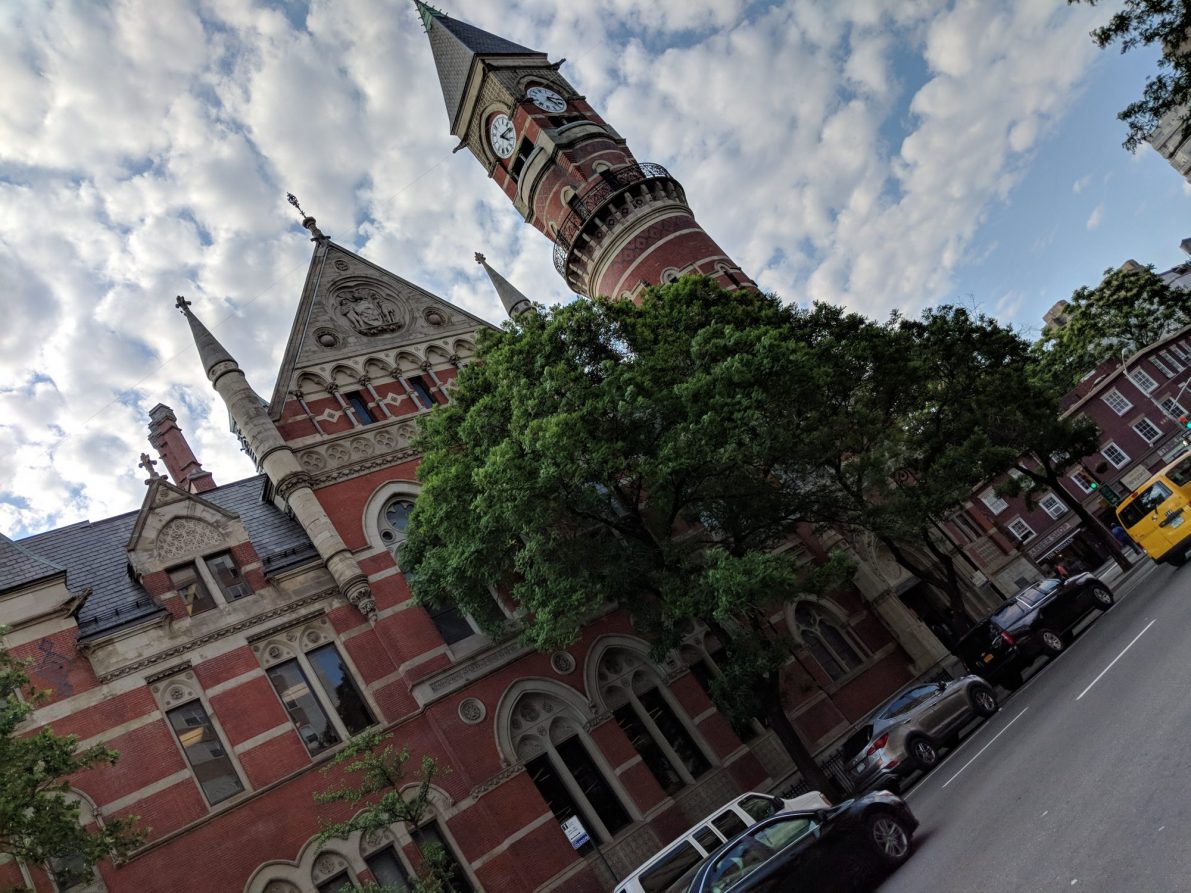 Read on to find out more about these iconic locations