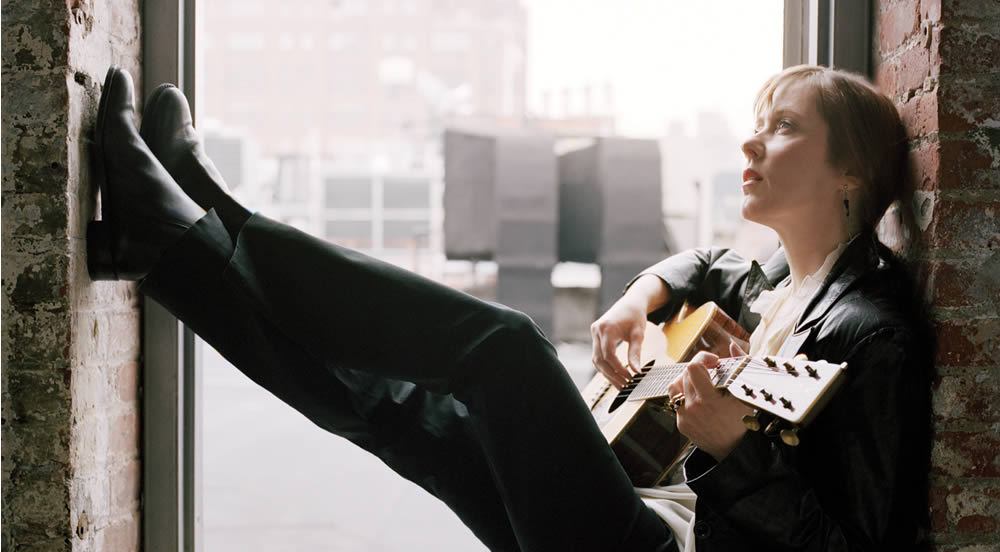 Suzanne Vega – whose career began in Greenwich Village in the new folk revival of the 1980s – is to headline Bringing It All Back Home to Washington Square, the free concert in Washington Square Park which is the focal point of The Village Trip.

Also on the bill are Martha Redbone, whose singing is an exhilarating fusion of R&B, soul and Native American influences, and VickiKristrinaBarcelona, the three-part harmony trio of songwriters and multi-instrumentalists comprising Rachelle Garniez, Amanda Homi and Terry Radigan who together “reimagine” the Tom Waits songbook.

The concert, on the afternoon of Saturday September 29, is a tribute to the legendary and influential music heritage of Greenwich Village.

Suzanne Vega was working as a receptionist in a publisher’s office when she ventured downtown with her guitar to join The Songwriters’ Exchange which included such figures as Rod MacDonald and David Massengill and which coalesced around the Cornelia Street Cafe – a partner in The Village Trip. Soon she was playing at such fabled venues as Gerde’s Folk City and the Bottom Line and, in 1985, she released her self-titled debut album, which featured “Marlene On the Wall”, a UK hit which Rolling Stone would include among its “100 Greatest Recordings of the 1980s.” It was Vega’s second album, Solitude Standing, which charted at #2 in Britain and #11 in the US, that made her a global success, garlanded with three Grammys and a platinum disc. It included “Luka,” perhaps the only hit song written from the perspective of an abused boy.

“I am happy to be doing this show in Greenwich Village, where I spent a lot of time in the eighties. I first ventured down to Folk City afraid to cross the threshold because I knew Bob Dylan had started there. But I was thrilled to be accepted by the gang of poetic songwriters I found. And it’s always good to be back.”

Martha Redbone, who grew up in the Appalachian mountains of Kentucky, came to prominence at the 2002 Native American Music Awards with her debut album Home of the Brave. She has since recorded three more albums, including The Garden of Love: Songs of William Blake. With her partner and musical collaborator Aaron Whitby, she has spent the last couple of years creating Bone Hill, a musical theater piece based on her Kentucky mining family’s history and heritage, a project supported by a grant from the New England Foundation for the Arts. Redbone said:

“I’m thrilled to be in the company of wonderful artists participating in this event. I spent my teenage years hanging out in Washington Square Park in the eighties.

“Though it wasn’t in its heyday, there were many remnants of the times before, and the spirit of Dylan, Joan Baez, Peter LaFarge, Pete Seeger, David Amram and many more permeate the downtown NYC area, leaving an aura of radical thought, freedom of expression and vibrant music echoing every decade that followed. This music was also a huge inspiration sparking our Roots Project honoring such folk music and also the music of my childhood in Harlan County, Kentucky.”

Speaking with one voice, VickiKristinaBarcelona observed:

“The songs of Tom Waits are characters in a story. They roam around town converging on the corner of Poetry and Groove where the ghosts of Village Beatniks gather in the wee hours. Each member a  veteran of Greenwich Village’s music scene, VickiKristinaBarcelona band reimagines the Waits songbook via three-part harmony and a treasure trove of instruments, keeping the spirit of playful creativity alive in the ever-changing landscape of the legendary neighborhood.”