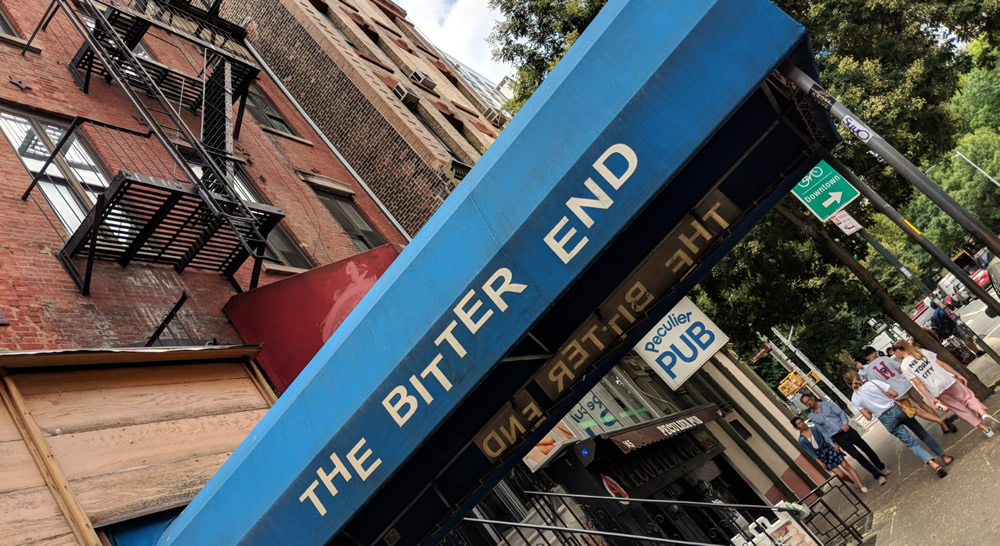 The Bitter End, one of the most historic clubs in Greenwich Village, is the venue for the closing event of this year’s The Village Trip festival.

On Sunday September 30 2018, the Bitter End, at 147 Bleecker Street, will play host to a celebration of folk music in New York City with Talkin’ New York Folk Revival, an evening of live music and chat which will end in a folk jam recalling the club’s famed 1960s hootenannies. Among those performing will be Happy Traum and David Massengill, whose Village roots run deep indeed, the former having played with Bob Dylan and the latter with Dave van Ronk, the legendary “Mayor of MacDougal Street” whose memoir inspired the Coen Brothers movie Inside Llewyn Davis. Other musicians will be announced shortly.

Like many a celebrated Village music venue, the Bitter End began life as a coffee shop. It was granted landmark status in 1992, its contribution to “artistic life in New York” noted on a plaque outside. The roll call of musicians who have performed there reads like a who’s who. Among them are Pete Seeger; Peter, Paul and Mary; Arlo Guthrie; Tom Paxton; Janis Ian; Neil Diamond; Randy Newman; Kris Kristofferson; James Taylor; Joni Mitchell; Neil Young; Janis Joplin; Patti Smith; and Roger McGuinn. More recently, Lady Gaga played there.

Bob Dylan played pool at the Bitter End and in the mid-1970s it was one of the touchstones in the birth of his celebrated Rolling Thunder Revue which featured among its all-star cast Joan Baez. Dylan’s telephone summons to her to join the tour inspired the song “Diamonds and Rust,” which reflects on their affair and the time they spent together in the Village, including at the old Hotel Earle – now the Washington Square Hotel, home base for The Village Trip.

The Bitter End was also central to the development of comedy in the Village, and among the innumerable comedians who trod its hallowed stage are Dick Cavett; George Carlin; Joan Rivers; Mort Sahl; Woody Allen; and Lenny Bruce, who paved the way for everyone.

The club was opened by film and TV producer Fred Weintraub, who is credited with discovering Bruce and was arrested with him for obscenity.

Paul Rizzo, who now owns the club, guards its heritage and maintains its traditions, and the Bitter End still hosts open mic sessions and offers a platform for young musicians making their way in the world.

View full details of the event and buy tickets.